One of the best ways to make storytime fun for your kids is to introduce a few of the weirdest things in the Bible. Some of these weird bible verses may be for older kids, but there are plenty of funny Bible verses for your little ones too.

I mean, really. Who doesn’t love a good story that has giants, talking animals, potty humor, or strange Bible heroes?

In fact, you may have fun reading some of the weirdest Bible verses to yourself. Forget the kids!

One thing is for sure, God has a sense of humor. So, loosen up and have a little fun with this!

RELATED: 37 Funny Mom Quotes and Sayings That Will Make You Laugh Out Loud 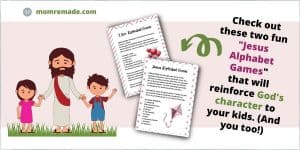 What Are the Weirdest Things In the Bible?

Check out the 45 weirdest things in the Bible that your kids (and you) will love. In fact, you may find your kids giggling way more than they should. You can’t blame them though. Some of the best stories in the Bible are just plain strange!

In fact, there are some shocking Bible verses that will have you saying “hmm” for a long time. On the bright side, this will give you plenty to talk about at dinner tonight.

RELATED: How to Discipline Kids: 29 Proven Strategies (For All Ages) That Work! 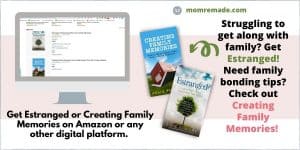 Purchase your ebook or paperback on Amazon or at your favorite digital store.

What Are Some Funny Scriptures?

One of the funniest scriptures in the Bible is the story about Elijah being called “baldy” by a group of boys. Wow, they had no idea who they were talking to.

Can you imagine making fun of one of the most powerful prophets ever? Yeah, that was dumb. I didn’t include verse 42 because it doesn’t end so well for the boys. (They get eaten by bears.)

I missed this in Sunday School. Perhaps the bear part made it too violent… 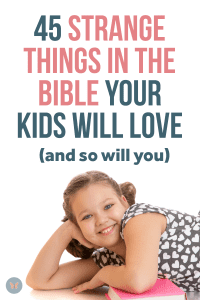 What the Bible Forbids

Truthfully, there are some weird rules in the Bible and most of them come from Leviticus and Deuteronomy.

Both of these books contain laws the Jews were to follow before Jesus’ time. They were legalistic, severe, and crazy laws to prove they could never keep them. (This is why Jesus came.)

And lots of laws about sex. Every kind of sex you can imagine. This is a kid-friendly post so I will skip that part, but it’s there…For kicks, go read Deuteronomy 25:11-12.

Yep, I told you. This passage gets the award for the weirdest Bible verses in the Bible. Don’t share this one with your kids until they are older…much older.

I hope you enjoyed 45 of the weirdest things in the Bible. Hopefully, you had a few giggles. God is fun.

What’s one of the weirdest things in the Bible you have read? Comment below. Got Family Problems? There is Help and Hope!

Are you experiencing family problems or even estranged? Are you feeling shame, anger, or rejection? Check out my book Estranged: Finding Hope When Your Family Falls Apart on Amazon or at your favorite digital store.

This book talks about my seven-year estrangement from my Christian family and also gives solid tips to help you with your own family problems. Break free from your pain. Allow God to heal you no matter what has happened in your family of origin. There is hope when your family falls apart. Continue the conversation on Facebook and join the group Christian Family Living. This is a place for Christian women to freely talk about parenting, marriage, faith, family, and culture. Being a Christian is hard! Let’s do it together. Most of all, a sense of humor is required. Got memes? Bring it on!

There are tips on building a Christian home, parenting, marriage, family issues, and faith. Learn how to get back to the things that matter most in your life and the life of your family. It’s time for a revival!

Purchase on Amazon or your favorite digital store today! 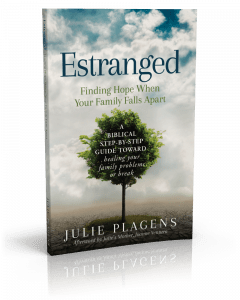 Check out these top trending posts! How to Pray for Your Child: 6 Tips to Pray In Your War Room (really pray) How to Change Your Husband With These 5 Powerful Prayers